At the end of another challenging year, Andrew Eddy feels fortunate to sit back and reflect on what was, perhaps, the biggest year of his life.

In 2021, any Victorian would be forgiven for throwing their hands up in the air, and their plans out of the window. But Andrew’s positive outlook and easy-going nature saw him kick countless goals in a year where most games were cancelled. 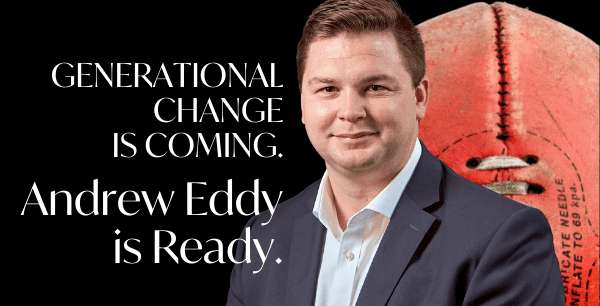 As a boy growing up in the northern suburbs of Brisbane, Andrew always thought he would grow up to do something in the outdoors and fisherman or horse trainer were at the top of the list. But after relocating to Melbourne to complete high school at Trinity Grammar, and later completing his Bachelor’s Degree in Accounting and Finance at Monash University he knew numbers and relationships were where he thrived.

Andrew landed his very first graduate accounting position at GMK Partners – interviewed by none other than Gary Immerman – an accountant was born, and the rest is history. Andrew’s enduring optimism, strong work ethic and renowned knack of ‘telling it like it is’ have supported his steady rise to recently being announced Slomoi Immerman Partners’ youngest Director in July 2021.

Describing his work at Slomoi Immerman Partners, Andrew is proud of the personalised service on offer, and sees his self-described “different perspective from someone quite a few years younger and from a different walk of life” as a distinct asset around the boardroom table.

He gives credit to his mentors, Laurence, Gary, Cameron, and John who have over the last decade shared their knowledge and taught him so much, with the most important lessons being to value relationships with clients, but especially with workmates and staff.

Andrew works with a varied client base, from high-net worth family offices through to active start-ups, young entrepreneurs, and younger businesspeople, who are just starting to build their business knowledge. Being a similar age demographic, this is the work that excites him most and energises him.

“Working with the younger generation who truly value your assistance and time and want to learn and help themselves be the best and have the best setup moving forward keeps me on my toes, and I love the variety when I come to work every day.”

He adds that “the interaction with family office clients is also exciting as the next generation coming through are going to take over those businesses or manage the family wealth, so working closely and assisting the next generation transition to the next level is important.”

There is no doubt that big generational change is coming. $3 trillion is expected to pass down to millennials over the next generation as baby boomers step back, and Andrew is excited to be there to see it through and support SIP clients strategically, with a strong focus on ethical and impact investing.

“In our office we are seeing people genuinely trying to make a better society, either through philanthropic endeavours or by starting and supporting tech savvy business that want to make a difference.”

Whilst Andrew’s successes at Slomoi Immerman in 2021 are considerable, they are not at the pinnacle of his list of achievements this year. In between lockdowns, he was lucky enough to finally marry his long-time partner Lucy, and in August they welcomed their daughter Charlotte. So, while for many the chaos and uncertainty of working from home was a challenge, for Andrew it was a golden opportunity to savour every moment of Charlotte’s first few months and be present to support her and Lucy.

“Bad things happen but you have to get on with it. You’ve got to deal with what you can deal with; you can’t dwell on stuff that’s out of your reach and out of your control”

Looking to the future Andrew doesn’t want much to change. He hopes to still be servicing his clients and supporting them to succeed, and helping his staff be the best they can be.

“I just want to be proud of myself- of the work I am doing and who I am doing it with. I want to watch Charlotte play sport and go fishing… and for the Demons to win more flags.”

Yes, a die-hard Demon’s fan, the cherry on top of Andrew’s unforgettable year was no doubt the long-awaited Melbourne Football Club premiership. Let’s see what awaits Andrew, and the Dees in 2022.